Buddy Franklin. Hooray! The 2013 AFL (Australian Football League) season has ended with Hawthorn (the Hawks) winning the premiership (much to the delight of my son who is a huge Hawks fan!).

Perhaps one of the most exciting sporting headlines recently, has centred around the highly publicised deal made that has Lance Franklin (aka Buddy Franklin) move to Sydney in one of the AFL’s biggest and most lucrative contracts to date.

Being such a public figure of interest right now, I thought he would make an excellent case study analysing his birth chart. Analysing Buddy Franklin ’s chart highlights the accuracy and benefits of having your birth chart analysed and the information that it yield you. Makes for excellent planning and guidance as you can know what is in store for you in years to come. In Buddy Franklin ‘s case, his chart exactly reflects the things going on his life right now and shows with precision what lies ahead for him both in his professional and personal life. Let’s take a closer look…….
In the next season 2014 year of the Horse, he will be playing for the Sydney Football club – The Swans. He has transferred from Hawthorn Football Club to Sydney Football Club.

Lance Buddy Franklin has played for Hawthorn Football club since 2005. He has been with Hawthorn in the last eight years. He was outstanding and played extremely well. Why is there change for him this year? Why he is moving to another football club and gets more pay? Is this his fate and luck? Are there signs shows in his Chinese Astrology chart?

Let me look at his chart and see what signs I can find.

I googled his name and found he was born on the 30th January 1987. (No birth hour) http://en.wikipedia.org/wiki/Lance_Franklin According to Chinese Astrology calculation, He was born in the Year of the Tiger.

The way Chinese Astrology works is that we need to convert one’s birthday data (Year, Month, Day and Hour) into Heavenly Stems and Earthly branches to construct the Chinese Astrology chart. Heavenly Stems and Earthly Branches is a unique method of recording time in Chinese Calender. Each Stem and Branch carries an element. (Wood, Fire, Earth, Metal and Water)

In Chinese Astrology fortune telling, the birth hour is important, especially when a person is over 49 years old. Since he is still very young, so let me just look at the Year, Month and Day. However if anyone connected to or knows Lance directly, please feel free to contact me or send me his birth hour for further analysis. 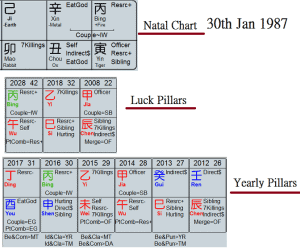 Earth element is Self-element. (He has one: Ox)

Metal element is his Output. (He has one: yin Metal Xin)

Fire element is his Resource. (He has one: Yang Fire Bing)

Wood element is his Power. (He has two: Tiger and Rabbit)

Water element is his wealth. (He has none. How come he earns that much?)

He has two Wood elements in his chart. Wood is his power. Wood in our body represents arms and legs. (Hawthorn is also a kind of tree and it is wood element too)  He is full of strength and famous for his powerful kick.

Fire element is his Resource. It also represents fame and name. Wood enhances Fire. It means his powerful kick brings him Fame.

Metal element is his Output. Metal is not a good element for him. However, the metal element is controlled and combined by the Yang Fire and its bad effects were reduced.

Most of the Chinese Astrology books teach that Water element is wealth to an Earth Day Master. Lance Franklin has none. Seems contradictory and the poses the question: How can he earn that much, one match of pay is equal to an average person’s annual salary?

The answer is that there is a condition for Water element to be Wealth for an Earth Day Master but those books do not mention. The condition is the classification of the chart type.

In Buddy’s chart, Earth element is his wealth, not Water element. He has Ox in his month branch which is earth.

In his chart, we can tell that (wood) power enhances his (Fire) fame, and Fire enhances Earth (money / wealth). Power is his strength. He has to use his strength to make money. Hence he is not an office person.

In his Chart, The Yang Fire Bing is the most important element to him. In Chinese Astrology, the Fire in his chart is the useful element. Sometimes it is also called useful God.

“In Chinese Astrology, the Natal chart is the Gene, The Luck Pillars and yearly pillars are the time table.”

So let’s look at the luck pillars and yearly pillars bring to the Natal chart.

Lance’s current luck pillar is Yang Wood Dragon. Dragon is Earth. Wood and Earth luck pillars represent Power and Money or wealth. It does not stop here. The most amazing thing is that the combination of the Luck Pillar with the Natal Chart brings in even more Earth (Money) and Wood (Power) Element.

Look at the following, it shows the route of the combination. 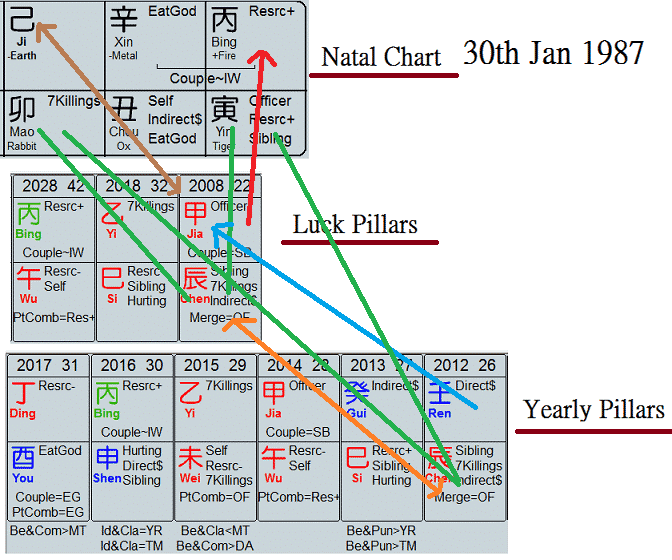 It may look complicated. However, all the combinations, reactions between the stems and branches changed to useful elements to benefit the natal chart. I am going to explain them in details. Some of you may be get bored. But if you know Chinese Astrology, you will be able to figure it out why.

Some of you may notice that this year is 2013 year of the Snake and wonder if I made a mistake by starting the combination at 2012 year of the Dragon. This is not a mistake; the yearly luck does not automatically start on the Chinese New Year day. Each person has a different yearly starting day unless they are twin. In accordance with true authentic calculation, Buddy Franklin ’s yearly luck is still in 2012 year of the Dragon. That is why we can explain why he has significant increase in income. This is due to Dragon + Dragon (Earth + Earth) money has double up. The water enhances the Yang Wood Jia (power) in the luck pillar. The Power also symbolises new job, promotion and new place for him.

The only year that shows any possible complications or concern is indicated in 2017 in which care must be exercised in certain parts of his chart (career, personal etc).

All in all, Buddy Franklin has very good luck cycle in the next few years.

I wish Buddy Franklin all the best!