In a Chinese Astrology Bazi Four Pillars of Destiny chart, the Direct Wealth, Indirect Wealth means wealth or debt for both male and female charts.

Other than Chinese Astrology wealth (negative or positive), the Direct Wealth, Indirect Wealth has an extra meaning in male chart. The Direct Wealth means wife and Indirect wealth means girl-friends. With this Chinese Astrology theory, we can explain why some men are luckier than the others. Some men’s wives are wealth (Wife makes money husband spends it). Some men’s wives are debt (Husband makes money wife spends it).

Have you ever thought of why that the ten 10 Gods relationship in Chinese Astrology, the wife is the wealth to a man.

One of the Chinese Astrology ten 10 gods rules it states: “我剋者為財”. It commonly translates into English as “I control or conquer is wealth”. In my view “剋” also has a meaning of “overcome or inserting”. Such as tree roots are inserting into the earth. Wood controls earth. 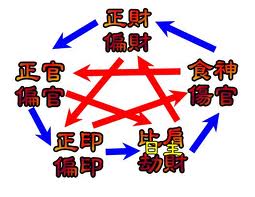 “剋”,(Insertion) It describes the intimate relationship action of husband and wife. If you have got some Chinese Astrology knowledge, it is not hard to explain from the female astrology chart point of view why “剋我者為官為殺”. In English “Control or conquer me is Officier or 7 Killings”.

The ten 10 gods are variables in a Chinese astrology chart. You may want to read more about them. Here is one of the articles for you to enjoy 10 Gods Bazi Analysis Family Members Relationship!