Bazi or Four Pillars of destiny and Ziweidoushu are the two popular fortune telling systems used in Chinese Astrology predictions today. If you were born in Melbourne, Australia, your Chinese Astrology chart is constructed the same way as people born in China. The is no need to change the seasons. 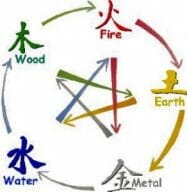 In Chinese Astrology the Heavenly Stems and Earthly Branches are used to represent the year, month, day and time of a person's birth date.