The Beijing Olympic Games has just closed not too long ago and it was the most spectacular one ever. The smooth progress of the Games brought the World over two weeks of enjoyment.

As I said before the opening ceremony:

“The date picked to open the event is an auspicious date which full of Water Element. The Water Element represents the spectators. This Olympic games I believe will have the most spectators or audiences around the world this time.”

In fact the 29th Beijing Olympic Games had the most spectators ever.

By talking about the Games, we must mention about the swimming superstar Michael Phelps. From Chinese Astrology point of view, are there any special about his Four Pillar birth chart? Is the opening day full of Water Element a benefit to him?

I believe anyone watched the Game knows who Michael Phelps is. But just let me briefly state a little bit of information about him.

Michael Fred Phelps (born June 30, 1985) is an American swimmer. He is a 14-time Olympic gold medalist (the most by any Olympian) and he currently holds seven world records in swimming. (Source http://en.wikipedia.org/wiki/Michael_Phelps)

Michael was born on June 30, 1985. The year, month and day can only give us 3 pillars. Chinese Astrology needs the birth hour as well in order to complete the whole picture — the Four Pillars. I was browsing the Internet to find out his birth time and finally got it. I constructed his chart and did some calculation on his past. I believed that that birth time was correct. He was born between 9 to 11pm at night.

His chart constructed as below. 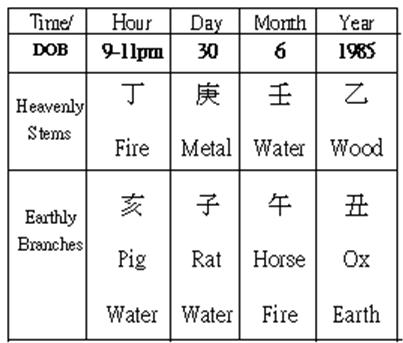 • Metal day was born in Fire (Horse) Month. The Metal element is NOT in Season. Metal is weak.

• The Pig, Rat and Ox form a Water harmony group. The Metal Day has NO support from the any of the Earthly Branches. The Water element group drains the Metal Energy. Metal is weak.

The Day Master Metal is so weak. This is a special set of Four Pillars. In Chinese Astrology term is called Surrender. It is based on a theory states that:

“Things will develop in the opposite direction when they become extreme.”

The Water Element in his chart represents good luck and fame. The Wood Element is Wealth and Spouse. In his charts he got both Water and Wood elements. He has fame and wealth and got power in the future.

However, at the first two Luck Pillars, the Heavenly Stems hurt the Parents Palace. Parents separated.

Still at the first two Luck Pillars, the Hour Pillar Pig and the Luck Pillar Snake clashed, The Day Pillar Rat and Month Horse also clashed. As the result he had hyperactive syndrome and needed medication.

After 18 years old, he started his Metal and Water luck Pillar. This is an extreme good luck pillar for him.

With extreme good luck, he even won his personal weakest event –  the butterfly by 1/100 second and won total of 8 Golds.

Unlike Michael, most of us just got an ordinary chart. However, if we understand our own chart then we can get the best out of it by following the Chart’s favor element to choose our own path. We can live a lot more happier!

Design Your Own Home