Feng Shui was an ancient Chinese wisdom which related to architecture and built environment. The philosophy of Feng Shui was to achieve harmonization amongst heaven, earth and human beings by providing equilibrium among nature, buildings and people. (Lee, S.H. 1986)

Most Chinese believe good Feng Shui is associated with good health and wealth in Chinese tradition. Good health also includes good reproductive function to produce offspring or descendants. Therefore Feng Shui became an indicator of fortune and method to extend the family blood line,  with good or bad Feng Shui affecting your opportunity for fortune in life. It is an ancient Chinese method of choosing the best places for living, working, conducting business and even burial.

Chinese Feng Shui Master will tell you the central concept of Feng Shui is "Chi" (Cantonese’s pronunciation) or "Qi" (Mandarin pronunciation). The simplest translation into English is “Energy”. This idea of the energy and life of the land is based on the Taoist understanding of nature.

While Chi is invisible, it can embody matter or forms (as in the formula E = MC2). Energy and Matter are interchangeable in much the same way as ice, water and steam.

Chi or Qi, the Energy is classified into five types:

Collectively they are called "Wu Xing" or the Five Elements or Five Transformations.

Feng Shui is one aspect of a deep and complex system that has been central to ancient Chinese culture for over 5000 years. The basic theory of Chinese medicinal practice is based on the same principles of Yin, Yang and the Five Elements (Wu Xing) which also form the basis of Chinese Astrology, Bazi or Four Pillars of Destiny.

At the beginning there were forms and compass feng shui only. But now, there are so many schools practice by Feng Shui Consultants.

Each school has its strength and weakness.

Feng Shui consultants look at or inspects the  “Chi” in relation to a location. Good "Chi" will bring good things to the house such as wealth, health, fame and fortune. On the other hand, bad Chi brings misfortune, illness and even miscarriage. Chi is also influenced by time and can change yearly, monthly, daily and even hourly.

What Feng Shui about is not only used to choose locations for domestic houses or business, but also to select sites for capital cities, towns and villages. This is called Yang Feng Shui.

There is also the method of choosing a good resting place to build graves for ancestors. This is called Yin Feng Shui (Dwellings for dead).

In the traditional Chinese custom, the main purpose of choosing a good burial site for ancestors, is to help ensure the best quality health, wealth and as many offspring as possible for the following generations. I believe that Yin Feng Shui is why China has the highest population in the world! 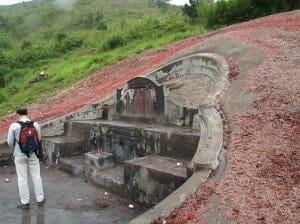 For Yin Feng Shui burial graves, there are a few styles. The one pictured here is a typical one from Southern China. It was built in 1700 and due to it’s good Yin Feng Shui Qi the offspring of this burial site are above 100,000. The good chi is produced by the effect of the water (Birth energy) flowing in front of the grave.

(There is water ‘Birth energy’ cures that can be implemented in Yang Feng Shui as well to speed up Feng Shui fertility. Here is a real case Feng Shui Fertiltiy Birth Qi)

In 1972, In China, when I was a young boy, my great grand father’s grave was moved to a better place for burial. It was at that time during Culture Revolution and Feng Shui was considered as superstition. Feng Shui was banned at that time. It was not as open as now. The Feng Shui ceremony must be done secretly. So the erection of the tomb stone ceremony was performed at mid-night due to date-selection as well as trying to minimize attention.

According to the Feng Shui Master’s calculation, he said the burial place was an excellent Feng Shui ‘Dragon Den’ and in the future there would be an “Officer” born in the family.

My brother was born in 1974. He is now a chief inspector in the Hong Kong Police Force. This is just one of the many examples that make me devoted to Feng Shui. You can read more about my Feng Shui Journery.

Here is a short video produced by Associate Feng Shui Consultant  tells what is Feng Shui and you can listen to the beautiful music too. You can find out more about Feng Shui after watching the video.

As you may know these two characters are ‘Wind Water’ written in Chinese. Here is more information about Feng Shui and its development in the West. Here are some readings for you.

Feng Shui, literally translates as “wind” and “water”, is a collection of ancient Chinese knowledge or experiences for improving well-being from the built environment. It is an ancient Chinese method of choosing the best places for living, working and even burial to improve every aspect of our life.

The concept of Feng Shui was first introduced to the West in the late nineteenth century by missionaries to China. The Rev. M.T. Yates was one the first to write in English on the subject in an article “Ancestor worship and Feng Shui” (Yates, 1868) (Mak & So, 2011).

In the early day, when feng shui was just introduced to the West, some scholars such as Rev. Dr. Jodrph Edkins (1872) criticized Feng Shui as ” the wind and water superstition of the Chinese. . . one of the great obstacles to the progress of civilization.”

One of the scholars Rev. E.J. Eitel (1873) gave a very superficial definition to Feng Shui, “Wind and Water, because it’s a thing like wind , which you cannot comprehend, and like water, which you cannot grasp.”

Feng Shui meaning is much more deeper than that.

More than a century later, Feng Shui is now extremely well accepted by most Westerners. I know that Feng Shui consultants, Feng Shui designs were involved in a lot of building construction projects worldwide.

Thanks to J. Needham, in his book “Science and Civiliaztion in China” (1956) that werstern readers began to appreciated the scientific context in which Feng Shui flourished.

The wind and Water (Feng Shui) are associated with good health and wealth in Chinese tradition.  Therefore Feng Shui became an indicator of fortune, with good or bad Feng Shui affecting your opportunity for fortune in life.

“Chi” (Cantonese’s pronunciation) or “Qi” (Mandarin pronunciation) is the central concept of Feng Shui. The simplest translation into English is “Energy”. This idea of the energy and life of the land is based on the Taoist understanding of nature.

While Chi is invisible, it can embody matter or forms (as in the formula E = MC2). Energy and Matter are interchangeable in much the same way as ice, water and steam.

Chi, the Feng Shui Energy is classified into five types:

Collectively they are called “Wu Xing” or the Five Elements or Five Transformations.

The earliest book of Feng Shui was called “Zang Shu” (The Book of Burial) written By Guo Po (276-324). Guo Po is often considered to be the founder of the Feng Shui principles. “Feng Shui” was first mentioned in his book.

Here are a few sentences from his book:

“Qi is dispersed when it rides on the wind [Feng]“

And is halted when it is bounded by a water course [Shui].”

The ancients were able to accumulate it and prevent it from dispersing.

They could channel it and keep it in one place.

And so it was called Feng Shui.