Eight House or 8 mansion Feng Shui School theory,  all houses are divided into eight sectors from the centre and two groups, the East and the West Group based on the eight trigrams from the Later Heaven Trigram or bagua.

Each trigram or Gua represents a direction and a sector in the compass, we have eight directions (45 degree per direction) and we get eight types of houses from the sittings. That is why it is called Eight House Feng Shui School.

In reality, most of the time the husband and wife are in different Feng Shui groups. However, there is a way to overcome this.

Before we go on. You need to remember the Trigram or Ming gua number.

Number 5 has no Trigram assigned to it. When 5 is the reminder, For male, it changes to 2 the Kun Gua. For female it changes to 8 Gen Gua.

The way to find out a person’s Trigram nubmer or Feng Shui Ming Gua number is easy. Just remember this formula.

Because of the Yin and the Yang, the Ming gua in Eight House Feng Shui School for male and female calculates differently.

Don’t forget that XX needs to calculate according to the 24 Solar Terms.

For A gentleman was born in 1967. His Feng Shui Gua number is calculated as the followings:

So any gentleman born in 1967, his Feng Shui Gua number is 6 Qian Trigram. He is a West Group Person.

So any lady born in 1967, her Feng Shui Gua number is 9 Li Trigram. She is a East Group person.

Here is a table listing the Feng Shui Ming Gua from 1901 - 2020 for both ladies and gentlemen. 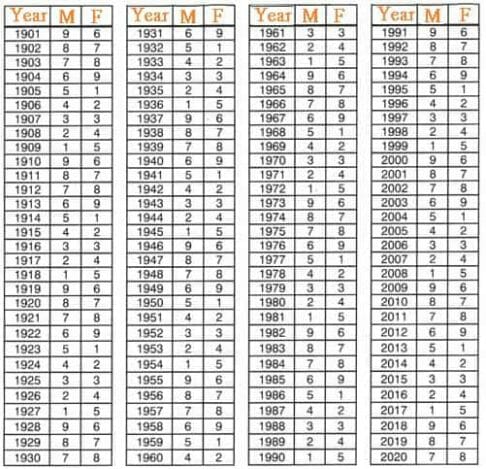 To work out the East or West Group of a house is complicated.

As far as I know, there are at least three different ways to find out a house which groups it belongs to. And it is very confusing for the beginners. The most common method is using the sitting of the house to identify which group the house is. 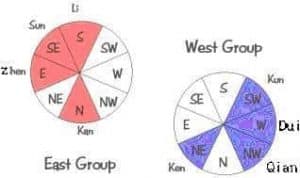 For East Group houses, the good areas inside the house are, East, South, North & Southeast.

For West Group houses, the good areas inside the house are, West, Northwest, Southwest & Northeast.

Of course, the areas inside the house has diffeernt level of goodness and strength.

In eight house or 8 mansion system of Feng Shui system, there are nine wandering stars. How to fit them into the eight sectors (Bagua)?

And there is a better and easier way to work out your person ming gua in the videos.

There are very few people know about the Yin , Yang and the element each of the wandering star and here are the details.

In fact, the eight house feng system 8 mansion system of feng shui is not that simple. To find out more you can watch my youtube channel for more explanation. If so, everyone can be a Feng Shui Master.