Man luck is the luck outlook for every animal sign in the year of the Fire Monkey. There are twelve animal signs or Chinese zodiac signs in Chinese Astrology. Each of us was born with an animal sign.

So what is the year of the Fire Monkey 2016 hold for you? 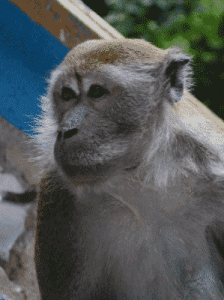 So, it is difficult to completely and fully predict just by using the animal signs or Chinese zodiac signs on how each year will affect each person individually at a very details level.

For more reliable assessment in all aspects of your life in year of the Fire Monkey 2016, it is recommended that you have your Bazi chart read by a reputable Chinese Astrologer near you.

Based on the yearly Heavenly Stem and Earthly Branch, these are the sensitive animal signs affecting by the Grand Duke or Tai Sui (太歲) in the year of the Fire Monkey 2016.

The Earthly Branch underneath is Shen (申). It is Metal element and it is represented by the animal sign Monkey.

In human body, Yang Fire represents the heart, the eyes, the small intestine and the shoulders. Its colour is red, pink and purple.

The Shen is also within the Kun Gua area. It is Earth element and Earth element is associated with digestive system, such as stomach, pancreas problem, food poisoning, muscle ache, skin, and cells disorder and so on.

For people born in the year of Monkey, Tiger, Snake and Pig must pay more attention to these areas.

Monkey, Tiger, Snake and Pig are the four birth places. They represent career and work, particularly monkeys and tigers who are working in the banking, finance and stock market sectors. Pay extra attention in February, May, August and November.

The above four sensitive animal signs should pay more attention when approaching major decision making, such as signing contract or be a guarantor.

More exercises, but not too intense, Taiji, Qigong and Yoga are perfect.

As the year indicates that the digestive and respiratory systems may have issues, so look after your diet all year round and perhaps take some health supplements such probiotics.

The year of the Fire Monkey also represents career and work.
So generally speaking Monkey, Tiger, Snake and Pig will be getting extra pressure from work.

For female Monkey, Tiger, Snake and Pig, giving birth in 2015 will reduce a lot of bad energy and troublesome.

For male Monkey, Tiger, Snake and Pig, a major events or function such as attending a wedding party, a big birthday party (including one of your own) will reduce some bad effective as well.

Do more exercises, be more active and think positively. For exercises, need to make sure there is sweating for every exercise.

Donation of blood or having a blood test done in February, May, August and November will help reduce some bad energy too.

Animal sign luck in the Year of the Fire Monkey 2016 for everyone.

The following is a guide for each animal sign and their luck in the year of the Monkey. It is a guide only. If necessary, please seek professional Chinese Astrologers service near you.

Animal sign Monkey will have a busy schedule, big pressure and it mainly comes from upper management at work.
Be open-minded and stay grounded yourself. Do not be too stubborn. Particularly Monkey signs were born in the year of 1980, 1992. Focus on your work and do your best to finish the task you were given. Do not pay attention to those who makes troubles out of nothing.
If there are happy events such wedding of a family member or your own, a new born into the family, and having a big birthday party can reduce some bad issue in the year of the Monkey.
There is an academic star for the Monkeys in 2016. Take up any opportunity for further learning or study.

The animal sign Tiger is having a clash with the year of the Monkey. Particularly, Tiger born in 1962 has a Heaven and Earth clash with the Fire Monkey.
Clash means confrontation and changes for the Tigers. As the result, there will be career change, job change, position shuffle within the same organization, school change, moving house and extensive travelling in the year of the Fire Monkey 2016.
Without doubt, the animal clashes with Tai Sui monkey will get the “Da Ho” (大耗) star. “Da Ho” means “Big spending.” So, Tigers spend wisely. It is wise to buy something will be valuable in the future.
Avoid risky investments and beware of contract terms if contract need to be signed.

1998 Tigers must pay attention while driving after obtain the driving license. As clashing easily cause traffic accident, particularly the Tiger with thick and bushy left eyebrow.

In the year of the Monkey, Tigers, if travelling, avoid going to the West southwest direction. Since the west southwest direction is the Grand Duke direction which will increase the strength of the clash.
May (6th May -6th June) born Tigers, in the year of the Monkey will form a Tiger-Monkey-Snake penalty. This penalty brings trouble with the family members, the authorities or you do something without thinking and injury yourself, particularly born in 1950.
Strongly suggest the Tigers who born in May, go to donate blood in August 2016. This may help reduce the penalty in the chart.

1989 born Snake beware of lawsuit, gossips in a new partnership. Beware of your friend (monkey or tiger) turn into enemy and against each other.
Make sure your paperwork tidy and up to date. There will be someone against you. Someone misunderstands you. Someone drags you into something you have not done.
An elderly may have health issue in the family.
February (4th Feb – 5th March) Tiger month born Snake, in Monkey year 2016, has a formation of a Tiger-Monkey-Snake penalty in the chart. This penalty brings trouble with the family members, the authorities or you do something without thinking and injury yourself, or an operation.
Blood donation is suggested to reduce the penalty in August.

The animal sign Pig has a penalty or harm relationship with the Monkey. (If the DM is also a Pig, it is double penalties or harms).
The Pigs are easily harmed or framed in the year the Monkey. They are also easily involved in lawsuit. Particularly animal sign Pigs born in 1983.
Laying low and do not make yourself too noticeable, particularly in May, August and November in the year of the Fire Monkey.
Be very careful on what to say in public especially in May and August 2016.
Penalty means easily breaking rules and regulations, such as traffic rules.
The Pigs has got the Nobleman star in the year of the monkey. The nobleman can help reduce some bad Qi. The female boss will help you if you have one.
Wealth: average Health: Digestive and excretion system

Rat and Monkey combines. This means there will be new joint venture or cooperate with new partners or new job. As a result, it brings benefit to the animal sign Rats.
Rats also will be meeting more new friends in the year of the Monkey.
If a particular rat, he is the elder son and lives in an east facing house, most likely he will get his dream job.
The good months for the Rats are April, August and December 2016.

Ox will have much better luck in 2016 compare with the year of the Goat. The bad gossips, big spending or lawsuit is fading away. The positive changes start toward the birthday month in 2016. But there is still some minor spending to come.
The Ox has two lucky stars, one means happy events such as, dating, wedding or new born. And the other star means the Ox will gain more power or promotion.
One thing still need to be aware is that minimize one’s egoistic and stubbornness.

There is a special relation for the Rabbits in 2016. It is ok for young and single Rabbits. For Rabbits already in a relationship, please think twice before you act. Don’t be afraid to say no.
There is also a sign of wounding or cutting the fingers. Internally, be careful of liver issue. Drink moderately.
There is a lucky star “Zewi” in the palace of the Rabbits, hope it can bring some help in the career area.

Wealth: Better in second half of the Monkey year.
Health: fingers and liver

The Dragons will still be very stubborn and religious in the year of monkey.
They have better wealth. Very similar to the Rats, the Dragon will be new joint venture or cooperate with new partners or new job. As a result, it brings better wealth.
On the other hand, A bad star called “White Tiger” (白虎) locates in Dragon’s palace this year. White Tiger is not a good star; it may bring a minor medical operation or caesarean section for female Dragons if giving birth in the year of Monkey.
There is also a star in the Dragon’s palace related to religious. If you have spare time it is good to be a volunteer in a religious organization.

The Horses do not have good star in the year of the monkey. So they should budget well and save. No risky investment particularly investing together with friends or siblings.
Keep clam. Do not act impulse.
Horses have a hidden travelling star, so there may be an unexpected trip for you.

Leading to your birth month, major health issues, love agony and relationship problems will slowly stabilize.
Before your birthday, you still need to lay yourself low. Don’t try to preach too much.
There is a nobleman ready to help but the nobleman only stay till you birthday in the year of the monkey.

The animal sign Dogs had penalty relationship with the 2015 Tai Sui. The penalty is slowly fading away toward the birthday month. 2016 the year of the fire monkey is good for the Dogs.
Animal sign Dogs they are working in the banking, finance and accounting sectors, and were born in Rooster month, (8th September – 8th October), they will have an excellent year of the Monkey. In addition, 1970 born animal sign Dogs, they will experience extraordinary smooth and progress.
The animal sign Dogs have a hidden travelling star, so there may be an unexpected trip for them.
Avoid spicy or chilli hot food.

Wealth: Excellent for those in financial sector. Health: Digestive and respiratory systems

Finally, I wish you all have an excellent year of the fire monkey 2016 to come!