Yearly predictions should use the Jia zi (甲子) cycle (Sexagenary cycle) and look at three different levels using the elements of the Heavenly Stem and Earthly branch of the year.

1. The Heaven Luck (predicts major issues of the world and weather).
2. The Earth Luck (Feng Shui for homes, offices and a nation.)
3. The Man Luck (predicts individual animal sign luck in the coming year)

Same as the past years, I will write an article for Heaven Luck, Earth Luck and Man Luck. Hopefully, it can be another piece of useful information for you to make reference to.

2015 YEAR OF THE GOAT PREDICTIONS – THE HEAVEN LUCK

The energy of Heaven Luck kicks in when the Earth is passing the Winter Solstice, normally on the 21st or 22nd in December each year calculating from North hemisphere point of view. Let’s look at the characteristics of the Heavenly Stem and Earthly branches in 2015.

The way of arrangement is top down.

This is a picture of Yin Wood on dry Earth: 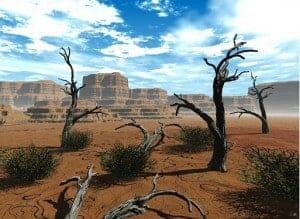 With such combinations, we can see these issues:

2. Yin Wood is Xun Gua and Xun is wind. In the year of Goat 2015, we can see more tropical cyclone activities. If you live in the tropical cyclone belt, make sure you have adequate protection, such insurance, fix up the windows, and strengthen up the roofs.

3. Natural disasters bring thunderstorms, power failures, lightning or electrical accidents in the year of the Goat.

4. Wood element on top controls Earth element. It symbolizes that the upper level supresses the lower level. Such as any government will increase force to supress rebels. As it is Yin wood element year, the government is most likely doing it secretly or manipulatively. As consequence, it may bring wars and killings.

7. Earth element is the digestive system, muscle, skin controlled by Wood, there may be issue related to these areas. So be more health conscious and eat healthy.

8. The flying star number 3, in the centre of the 9 palace meaning fighting, lawsuit, arguing, gossiping is coming to the centre of attention.

9. The Three-killing and Five Yellow Sha is located at the West, there will be issues, as violent or sexual harassment to the younger females. (Some more explanation in the Earth Luck article)

10. We are now in Feng Shui age 8. The age star number 8 is also in the centre palace. The annual flying star number 3 (Wood element) controls the number 8 (Earth element)
The Earth element 8 can means young kids and property. So, make you keep an eye on your children more closely and frequently. Property price may be slowing due to some controlling.

11, Bush Fire, the yin fire Ding is hidden in the Earth Branch, as year of the Goat is Wood element dominating. The Fire is waiting there patiently for it chance. There are two ways the fire can be rushed out. First, in the Horse month (June 2015) the horse combine with the Goat to produce Fire. So in June in North hemisphere, there will be bush fire Secondly, by clashing with the Ox month (January 2015), the fire in the Goat will be released. So Fire in January 2015 is in South hemisphere.

In the year of the Goat predictions, Earth is property, building construction. The industry will be controlled by the Wood element.

Be very careful in these months January, April, July, October in 2015 if you are speculating on the share market.
January means early January to early February.
April means early April to early May.
July means early July to early August and
October means early October to early November.

Year of the Goat 2015, the annual Feng Shui flying star number 3 will be located in the centre palace. The number 3 is Wood element (Zhen Gua). Other than the above mentioned earthquake issue. Number 3 also represents Gossip, dispute, argue and controversy. Remember “Silence is golden”.

Current Feng Shui age 8 (8 is Gen Gua, representing Children), 8 is leading element in the centre palace. The leading element 8 Earth is controlled by the 3 wood element in 2015. Hopefully it will not bring too much of issue to the young kiddies.

Weather in 2015 year of the Goat predictions

Generally, the weather patterns or events in the year of Pig, Rabbit and Goat are slower to evolve and to fade away, in the other words, the cold spells and summery days stay on for relatively longer periods.